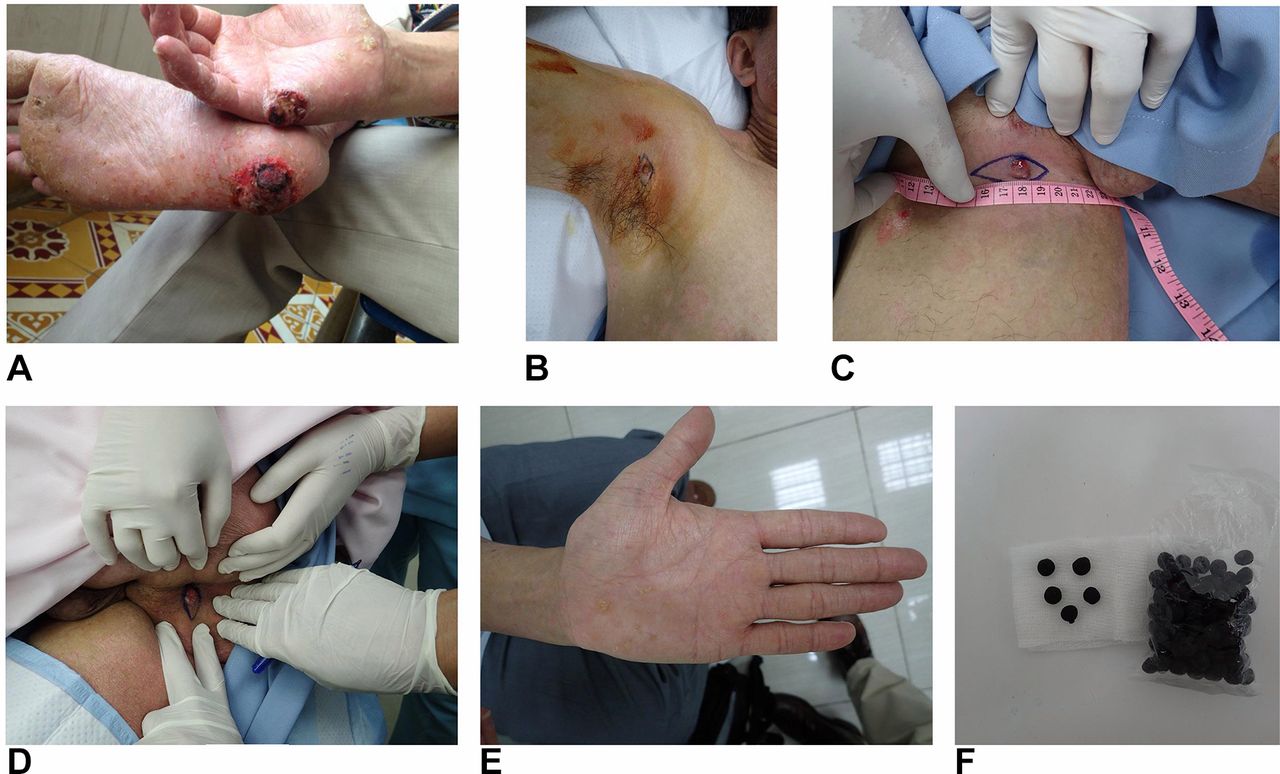 We report a case of a 46-year-old Vietnamese man who developed widespread, numerous and concurrent cutaneous squamous cell carcinomas (SCCs) in non-sun exposed skin areas after taking a traditional medicine (TM) formulation for chronic plaque psoriasis. The SCC lesions began to develop within 12–15 months after beginning the arsenic-containing TM. The patient experienced both acute and chronic symptoms consistent with arsenic exposure. Laboratory investigation of a collected hair sample showed a significant arsenic level. The TM formulation used by the patient was tested and demonstrated an extremely high concentration of arsenic.

Arsenic is a potent human carcinogen, with the skin being particularly susceptible to chronic arsenic exposure.1 Chronic arsenic toxicity (CAT) is most often associated with naturally occurring arsenic-contaminated groundwater sources which are tapped as drinking water resources. Some traditional medicines (TMs), sought as primary, secondary or supplemental treatments for a myriad of conditions, are another potential source of chronic arsenic exposure. Common chronic disorders like asthma or psoriasis may lead to the long-term use of TM formulations containing arsenic. Arsenic’s concentration in some TM formulations can be hundreds of times higher than the safety threshold for exposure to arsenic. As patients increasingly seek out complimentary medicine, the use of heavy metals like arsenic in TMs and its potential consequences should be considered in patients presenting with chronic conditions who are taking TMs.

A 46-year-old Vietnamese man having an 18-year history of poorly controlled chronic plaque psoriasis, presented with two progressive, ulcerative palmoplantar lesions: an ulcerative lesion at the aspect of the right palm proximal to the fifth digit and an ulcerative lesion at the right calcaneal sole (figure 1A). The lesions were histologically confirmed as SCCs and surgically excised. Due to each lesion’s size and the acral location, wound healing was judged problematic. The wounds were treated with a combination of topically applied insulin and zinc hyaluronate.2 On a later second review, a further four SCC lesions were found and excised, three of which were located in sun-protected sites of the right axilla, right inguinal and perianal locations (figure 1B–D). A nodular lesion on the right posterior calf was also excised and confirmed as an SCC.

Less than 3 years previously, the patient had begun taking a TM formulation for treatment of chronic plaque psoriasis. The TM was taken as 5 units two times a day for under 2 years (figure 1F). While the patient felt his psoriasis improved with the use of the TM, he experienced significant adverse effects with the acute onset of nausea, and occasional vomiting, within the first week of use. Within the initial 3 months, he experienced nausea, anorexia, fatigue, alopecia and noted the emergence of white horizontal lines on his fingernails. After 3-month use of the TM formulation, the patient experienced waxing and waning mouth ulcers, and alopecia worsened. Small foci of non-healing ulceration began to develop at the right distal palm proximal to the fifth finger and at the right calcaneal sole after 12–15 months of the use of the TM. These lesions progressed and during this time he also noted, either by palpation or by sight, the emergence of nodular lesions occurring at his perianal, right axilla and right inguinal skin areas.

Due to the previously confirmed acral-site SCCs and the history of long-term use of a TM antecedent to the lesions, CAT was suspected. On examination, palmar hyperkeratosis (figure 1E) and a ‘raindrop’ pigmentation pattern appeared to be present on many skin areas. Although both of these clinical features are consistent with non-malignant skin changes of CAT, their presence in the setting of widely distributed psoriasis allows these findings to be missed or attributed to underlying psoriasis, as psoriasis can lead to postinflammatory pigment changes and affect the palmar–plantar skin surfaces.

Analysis of a hair sample from the patient was obtained approximately 18 months after the use of the TM had been halted. Arsenic was present at a concentration of 2.15 µg/g (normal <1 µg/g). The patient had retained significant unused specimens of the TM formulation, and a quantity of 100 pills (equivalent to 30 g) was tested. The analysis revealed arsenic present at a concentration of 3.5 g/kg. At this concentration, it can be calculated that the patient was ingesting 10.5 mg of arsenic daily when consuming 5 units two times a day, an extremely high dose of arsenic.

The management of invasive SCC is primarily surgical, and all six SCCs were excised with 4–5 mm margins. The patient had ceased consuming the TM formulation 18 months prior to his clinical presentation; thus, no acute arsenic exposure treatment measures were taken. Likewise, although there is some evidence in the use of 2,3-dimercapto-1-propanesulfate to treat CAT,3 we felt chelation therapy would not be of benefit as the exposure was distant. Nicotinamide, an amide form of vitamin B3, 500 mg two times a day was recommended to the patient based on possible benefit seen in a recent molecular study demonstrating the enhancement of repair of arsenic and ultraviolet radiation coinduced DNA damage.4

The patient remained well for 15 months. His chronic plaque psoriasis was well controlled with a combination of topical corticosteroid-vitamin D analogue ointment and emollients. Due to his multiple SCCs, we advised that phototherapy for psoriasis must be avoided. He subsequently did develop an ulcerated nodular lesion on his right upper chest area. A complete excisional biopsy of the lesion showed the presence of both SCC and basal cell carcinoma (BCC).

The degree of arsenic content in the patient’s TM formulation was extremely high, especially when considering that an acute lethal dose of arsenic trioxide is approximately 70–180 mg.5 6 The patient’s daily dose was approximately one magnitude of order less than a potential acutely lethal dose. The high concentration of arsenic correlates clinically with the rapidity of onset of symptoms of nausea, vomiting, fatigue, hair loss and nail changes, and the early onset of skin malignancies, as the first ulcerated lesions on the right hand and right sole began approximately 1 year after continuous use for two times a day. A similar level of arsenic as seen in this TM has been reported in a previously published study investigating the arsenic content in Asian traditional medications, in which one of the most heavily arsenic-concentrated formulations was sourced from Vietnam.7

Arsenic is abundant throughout the earth’s crust, representing the 20th most abundant element. It is a known human carcinogen, listed as a group I carcinogen by the International Agency for Research on Cancer.8 Arsenic has numerous non-carcinogenic effects in both acute and chronic exposures on every organ system. Despite arsenic’s well-established carcinogenicity, precisely defined mechanisms of carcinogenesis have been difficult to establish definitively, while multiple cocarcinogenic mechanisms are likely. CAT has been linked to cancers of the lung, liver, kidney and bladder, while CAT is associated with a markedly increased incidence of Bowen’s disease, SCC and BCC.6 9 The latency period between the onset of chronic arsenic exposure until the appearance of arsenic-induced skin cancers may be 3–4 decades6; however, greater magnitudes of arsenic exposure may show a significantly reduced latency period for both non-malignant and malignant skin changes.9 10

The skin is the most commonly affected end organ of CAT, with the earliest skin changes of chronic arsenic exposure being non-malignant.1 9 11 Hyperpigmentation, a ‘rain-drop’ pattern of admixed hyperpigmentation and hypopigmentation, and palmar–plantar hyperkeratosis, or arsenical keratosis, are the most frequently encountered cutaneous manifestations of CAT9 11 and their occurrence represents the most sensitive clinical marker for CAT.1 Arsenical keratoses occur at palmar and plantar surfaces, which experience pressure, friction and repetitive minor trauma. Intertriginous skin sites also fit a profile of repetitive, frictional trauma, and the involvement of such skin areas in CAT correlates well with cutaneous-site eruptions observed following documented acute mass arsenic poisonings that resulted in a high frequency of intertriginous skin involvement,5 and a site predilection for pressure points of tight clothing in contact against the skin.12

The skin changes of CAT are insidious, and their advancement is linked to the magnitude and duration of arsenic exposure9; however, these cutaneous changes do not occur in the majority of chronically arsenic-exposed individuals,9 13 nor are the features pathognomonic, but when present raise the suspicion of CAT. The presence of non-malignant skin signs of CAT represents a risk marker for future cutaneous malignancy and internal malignancies,1 13 14 while the presence of arsenic-induced skin malignancies increases the risk significantly for internal malignancies.13 15 16 In a majority of the internal malignancies attributed to arsenic exposure, such malignancies were highly associated with at least one hallmark feature of chronic arsenical skin changes, including multiple skin malignancies.13 15 16 The prototypical clinical features of arsenic-induced skin cancer are its affinity to occur on sun-protected areas of the body, in skin areas under pressure or repetitive minor trauma, and the propensity for multiple lesions.

Although our patient initially presented with progressive ulcerated acral SCC lesions, the presence of ongoing chronic inflammatory skin changes of underlying psoriasis certainly leads to difficulty in the recognition of non-malignant cutaneous manifestations of CAT and the presence of early skin malignancies, such as Bowen’s disease lesions and superficial BCC. Our patient was Vietnamese, with an estimated type IV photo skin type. Cutaneous SCC is a rare to uncommon skin malignancy in the Vietnamese population. Additionally, the SCCs occurred in non-sun-exposed skin locations.

Chronic arsenic poisoning is a significant global health threat that predominantly involves environmental exposure to contaminated groundwater sources such as tube wells sited around alluvial river deltas.17 18 Unregulated TM formulations containing arsenic, intended to treat a variety of chronic ailments are another serious exposure potential for CAT. Arsenic-containing compounds and formulations have been used for millennia and have been a part of mainstream medicine for the last two centuries. Iatrogenic arsenic exposure from prescribed arsenicals has been linked to skin malignancies in sporadic reports spanning more than a century. The ingestion of arsenic-containing TM formulations frequently results in prolonged and greater arsenic exposure, at doses higher than those present in contaminated groundwater sources, representing an increased risk of skin malignancy, often for numerous cutaneous malignancies.7 In many markets, in both developed and developing countries, it has been found that between 20% and 40% of TM formulations have contained arsenic or other heavy metals at levels beyond public health guidelines.19 CAT should be considered in patients presenting with skin cancers in sun-protected areas who may have chronic medical conditions such as psoriasis, eczema and asthma, who are taking traditional and herbal remedies. The presentation in this case demonstrates the hazards of medicinal arsenical formulations, wherein an unregulated ‘traditional’ medication may be used for a chronic condition. The producers and compounders of such formulations may knowingly rely on the historically acclaimed and lauded attributes of arsenic-based medicines, while most patients are unaware of the formulation’s actual content, composition or concentration of arsenic.

This is an Open Access article distributed in accordance with the Creative Commons Attribution Non Commercial (CC BY-NC 4.0) license, which permits others to distribute, remix, adapt, build upon this work non-commercially, and license their derivative works on different terms, provided the original work is properly cited and the use is non-commercial. See: http://creativecommons.org/licenses/by-nc/4.0/ 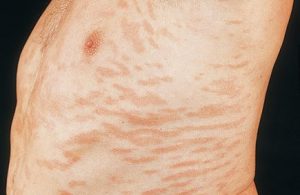 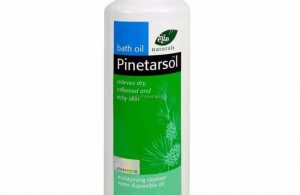